I am currently raising money to help rebuild the Agape Children’s Home, which is a part of The Mustard Seed Mission(MSM).
MSM has been caring for & meeting the needs of the people of Taiwan for over 60 years…one of which was mine. They facilitated my adoption when I was just a baby, which brought me the opportunity to live the blessing of life that I am still living to this day. It is on my heart to give back to the place that helped me to get such a great start in life. My life was impacted greatly, because one lady cared enough to step out to start the MSM so many years ago. These last few years I have felt a re-connection to this mission and the people of Taiwan.

MSM is planning to continue caring for the children with their plans to build a new multi-purpose facility in Taiwan, providing a new home for the children.
The new building will:
-Meet their current needs and provide more opportunities for their future.
-It will include new & larger living spaces for the children. The current facility is old, and in need of repair.
-It will have in house counseling services to meet the needs of the children.
-House single mothers along with their children while helping them to recover during difficult times.
-Offer vocational training for the young people that will not be attending college & give them hands on experience in the occupation of their choice.
-Enable MSM to have space for the young adults(over age 18) to continue living there while transitioning into adulthood.
Matt & I will be running the Mercedes-Benz Marathon Weekend on Feb. 12, in hopes of raising awareness and support for the Mustard Seed Mission’s new building project.
We would appreciate your support. If you would like more information, or would like to donate to our project, Mustard Seed has created this website for us:
http://mymustact.weebly.com/donation.html
If you would like to follow my personal thoughts along the way, you can “like” this page.
https://www.facebook.com/juliamustact/
Thank you so much, and thank you all for being part of my life’s journey….and do please click “share”. You never know where your simple sharing may lead & who all would like to donate to such a project. ❤
Love you all,
Julia
#2017MustAct
2017 MUST ACT – Run for Kids 為孩子而跑
Julia Davis #mustact

I recently told a friend about my birth mother search. As a new runner herself, she brought up an interesting point. My friend suggested that running may have contributed to my decision to search. She has noticed in her own life that running has helped her to be more adventurous in her life choices. I can see how that is true.

Sometimes I role play in my head. For example, let’s answer the “what if’s” I mentioned before:
-What if I look dumb…wouldn’t be the first time.
-What if I can’t run up that hill…then I’ll walk.
-What if I come in last…then I will, oh well. Plus I’ll help all the other runners that were hoping they wouldn’t be last feel better about their run.
-What if I can’t finish…then I will be terribly disappointed & I’ll be glad that I tried.

You learn that each race is different, but still awesome. You learn that the “what if’s” don’t usually happen, but when they do occasionally…..life. goes. on. You do what you have to do & You keep moving forward. You get over the loss & go on to run the next race.

Concerning adoption, I’ve realized that when I was ready for the “what if’s” to be a reality…I was ready to begin my search. For a variety of reasons, it took me 41 years to get to this point. Life’s not just about the wins, but it’s so much about the richness of the journey along the way.

Blessed….thankful…the “what if’s” aren’t so bad after all...

I was so excited about a dream of mine for the future,

that I had to go to sleep to quit dreaming… 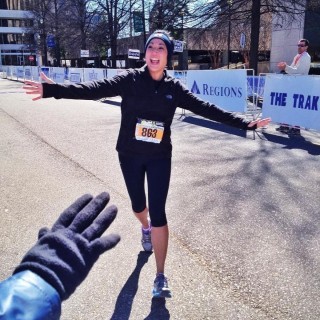